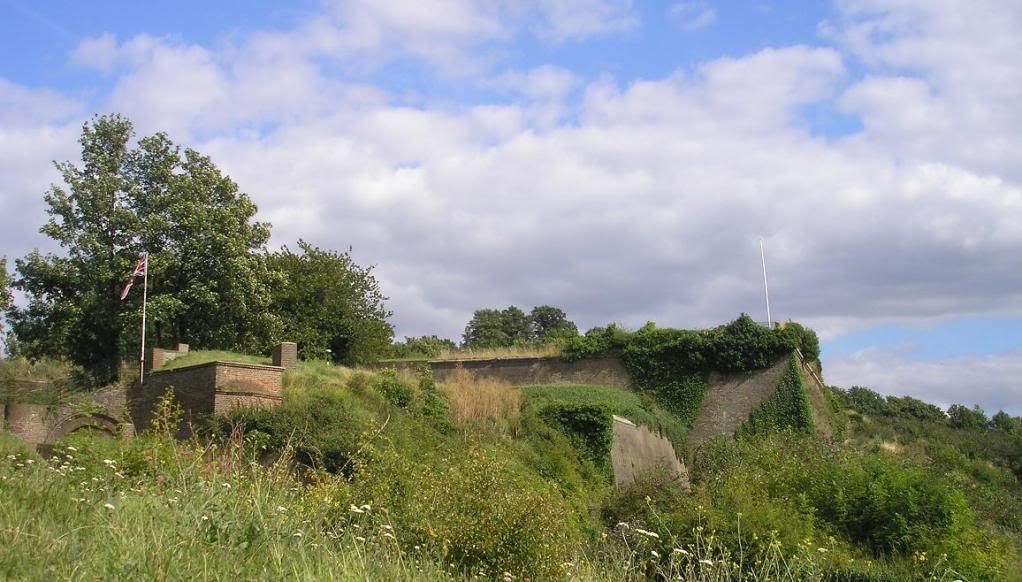 Siege Operations were spectacular mock military battles that involved attacking and defending fortifications for training exercises for siege warefare. They took place on the Great Lines and Lower Lines in the 19th century.

The operations often included (amongst other things) Escalading (using Siege ladders to climb the dry ditch walls), Mining (digging tunnels and then using explosives to breech the ditch walls) or using Flying Bridges to cross the ditches. The Siege Operations were watched not only by military personel,but also huge crows gathered to watch them and sometimes even royalty. The press were usually there to and great accounts of the operations were witten about and sometimes had accompanying illustrations.

Unsuccessful attempt to escalade the right of Chatham Lines

The elite of the company present was accomodated with cards of admission to the Belvedere Battery at Fort Amherst,and the Casemate No.1,where the best view could be obtained of the operations. Amongst them were Prince George of Cambridge,Prince Edward of Saxe-Weimar,the Duke of Leeds,the Earl of Cardigan,The Earl of Darnley and other important dignitaries.

The first part of the military operations consisted of an unsuccesful attempt to carry the right of the Chatham Lines by escalade.
The Lines at this end were defended by a company of the Royal Artillary on the extreme right. The Provisional Battalion and Enrolled Pensioners in the centre,and a company of the Royal Sappers and Miners on the left. The whole lining the parapets from the Gun Wharf to the spur Battery.
The Flanks and Salients were armed with ordnance and manned by two companies of the Royal Artillary.
The Assaulting troops,on the other hand,consisted of the 17th Regiment on the left,the Royal Marine Artillary and Royal Marines in the centre,and te Royal Sappers and Miners on the right.

On the signal being given the three columns rushed forward simultaneously and with admirable precision. Skirmishers were thrown out,and the cover which the ground afforded used as much as possible.
The defending troops sheltered their bodies behind the ramparts then briefly showed themselves above the parapet and fired blank cartridges at the attacking force,then withdrew out of sight to re-arm.
The Sappers advanced along the side of the hill and sheltered themselves from the fire of the fort,descended into the ditch,but were pulled up by a hedge which they were unable to get through,so had to change direction.
The Marines were equally unfortunate,the left wing being beaten by a high wall,and the right,after descending into the ditch and scaling the opposite wall,being obliged by the vigorous resistance  of the besieged to retire.
The 17th Regiment also descended into the ditch but there their scaling ladders were too short,and the opposition too strong for any chance of success and so they withdrew also.

The details of the operations were in all respects admirably performed,and excited general approbation. The scenic effect of it all was beautiful and the height of that part of the Lines added to it's dramatic appearance. It was said the attacking columns exhibited the utmost daring,and it remains a question between the divisions which distinguished themselves most on the occasion. An impervious hedge,a high wall,and short scaling ladders were the real causes of the retreat,and not the slightest taint rests upon the honour of the Corps engaged.